Many famous people have commented about the Bahá’í Faith. Here we mention a few of them and their comments... 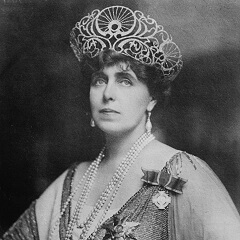 The first Bahá’í from a royal family, Queen Marie of Romania, became a Bahá’í shortly after her husband King Ferdinand died and her five-year-old grandson Michael ascended to the throne. Before becoming a Bahá’í, she and her husband famously led a liberalized Romania that expanded its reach and scope after World War I. Well-known as the real decision-maker in the Royal Household, Queen Marie led a European nation emerging from its oppressive past into a modern future.

“A great cry toward peace, reaching beyond all limits of frontiers, above all dissensions about rites and dogmas... It is a wondrous message that Bahá'u'lláh and His Son Abdu’l-Baha have given us! They have not set it up aggressively, knowing that the germ of eternal truth which lies at its core cannot but take root and spread... It is Christ’s message taken up anew, in the same words almost, but adapted to the thousand years and more difference that lies between the year one and today... If ever...”

“The name of Bahá'u'lláh or Abdu’l-Baha comes to your attention, do not put their writings from you. Search out their books, and let their glorious, peace-bringing, love-creating words and lessons sink into your hearts as they have into mine… Seek them and be the happier.”
Queen Marie on the writings of Bahá'u'lláh and Abdu’l-Baha

Here is one of Queen Marie’s own hand-written testimonies about the Bahá’í Faith: 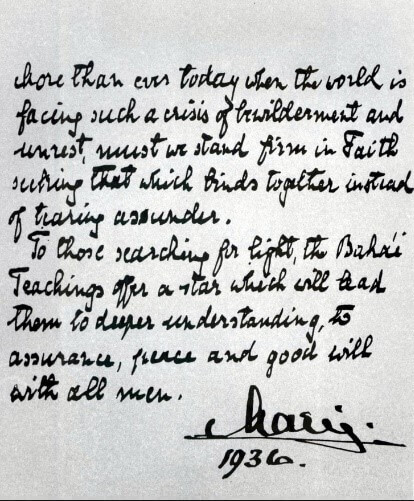 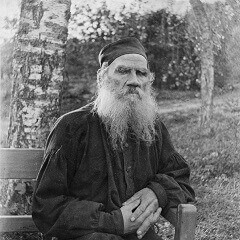 Tolstoy, was a Russian writer who is regarded as one of the greatest authors of all time. In a letter to Frid Wadelbekow writes about the teachings of the Bahá’í Faith brought to us by Bahá'u'lláh:

“The teachings of the Bábís which come to us out of Islam have through Bahá'u'lláh’s teachings been gradually developed and now present us with the highest and purest form of religious teaching.”

“We spend our lives trying to unlock the mystery of the universe, but there was a Turkish prisoner, Bahá'u'lláh, in Akka, Palestine who had the key.” 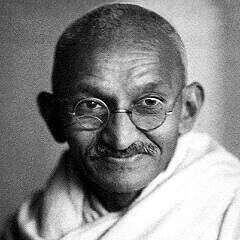 Mahatma Gandhi had these words to say:

"The Bahá’í Faith is a solace to humankind." 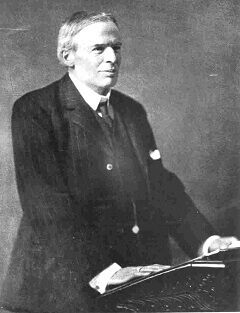 Professor Edward Granville Browne, of Cambridge University, was the only Westerner who actually met Bahá’u’lláh. He had four successive interviews with Him in April 1890. Of his first meeting, Professor Browne had this to say:

"The face of Him on Whom I gazed I can never forget, though I cannot describe it. Those piercing eyes seemed to read one's very soul; power and authority sat on that ample brow... No need to ask in whose presence I stood, as I bowed myself before one who is the object of a devotion and love which kings might envy and emperors sigh for in vain."
Professor Browne on his first meeting

He went on to record Bahá’u’lláh’s own words at that same meeting:

"... That all nations should become one in faith and all men as brothers; that the bonds of affection and unity between the sons of men should be strengthened; that diversity of religion should cease, and differences of race be annulled — what harm is there in this? ... Yet so it shall be; these fruitless strifes, these ruinous wars shall pass away, and the 'Most Great Peace' shall come... Let not a man glory in this, that he loves his country; let him rather glory in this, that he loves his kind."
Bahá'u'lláh regarding the meeting

The following photograph shows the room where he met Bahá’u’lláh in Akka:

In his book “A League of Religions”, the Reverend Griffith J. Sparham, of Highgate Hill Unitarian Christian Church, London, England, writes the following: "The Bahá'í religion has made its way because it meets the need of the day. It fits the larger outlook of our time, better than the rigid older faiths. A characteristic is its unexpected liberality and toleration. It accepts all the great religions as true and their scriptures as inspired.